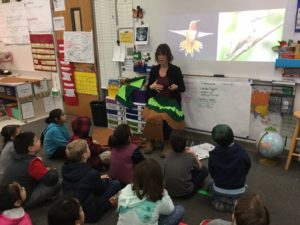 Anyone who has watched the annual Procession of the Species understands the positive vibes that this event brings to downtown Olympia. I wanted those same joyous feelings to come to my school, Evergreen Elementary. I adapted an event that Nature Canada in BC promotes—Wildlife Migration. I added a cultural piece to it and changed the name to Migration Parade. This event was a symbolic parade that celebrated the journeys of animals as they make seasonal voyages that are often dangerous, but necessary, for species survival. The parade included obstacles that were both natural and human impacts. Students were asked to dress in some type of artistic representation of the animal, whether it was a mask or hat or other costume. Students were also invited to dress in attire that represented their culture to symbolize the historic movement among all cultures to find opportunities for themselves and their family.

My students created monarch butterfly and Rufous hummingbird costumes since these are two species of animals that have been greatly impacted by human behaviors. Carrie Ziegler partnered with this project to help us make the connection between art, science and action. She shared some of her environment art projects and taught students that sometimes art can evoke positive reactions from community members that traditional methods of communication sometimes can’t. 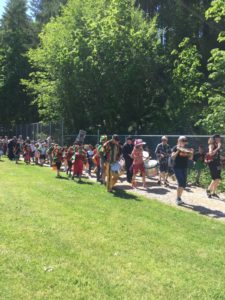 We also used bird feeders outside our classrooms during the year to become familiar with our local bird species around our schoolyard. The kids learned that most of the birds that came to the feeders were House Sparrows, which were brought over from Europe. We did see a hummingbird come to one of the feeders, but we weren’t able to identify the species.

I teach biodiversity in 2nd grade so this project addressed NGSS and also included climate science. Students learned about the importance of biodiversity and the interconnectedness of all Earth systems through presentations, videos, reading, writing, guest speakers and art. I also partnered with Ms. Flores’ 5th grade class for this project. Ms. Flores’ class created costumes that represented the obstacles to migration that were both natural and human created.

The organization of the event was the biggest challenge: Which date? Have the parade on the sidewalks or the streets? What if it rained? This was the first time I had ever organized this event so I was trying to keep it manageable. I also tried to limit the number of staff involved in the organization. The reason for this was that the event evolved organically for me over the year as I envisioned what it would look like. Because of this, I was responsible for the majority of the organization—which was a lot of work.  I did request consultation help from Nisqually River Education Project, since I thought they could give me some direction and feedback with the organization of the day. This turned out to be very, very helpful. With the help of Sheila Wilson, I organized an Environmental Field Day for all of 2nd grade and invited the entire school to participate in the parade. Funding of the project was another challenge. Luckily, the event was entirely financially supported with a grant from Hood Canal Salmon Enhancement Group and by Nisqually River Education Project. Next year I hope to have the school or district more involved in providing materials for the event. 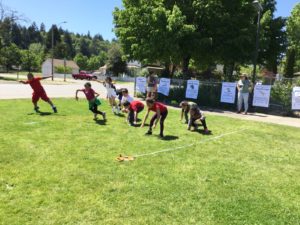 There were so many memorable moments throughout the day. Seeing about 400 students dressed in some kind of animal mask or costume march around the school with members of the Samba OlyWa leading with their musical beats was incredible. This day required 10 months of planning that resulted in a joyous parade of migrating K-5 students and staff.  At different points of the parade, my students were chanting, “Migration, migration!” and “No trash, no trash!” 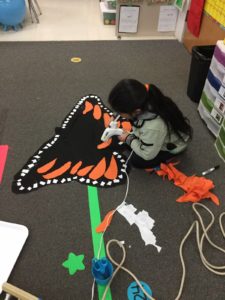 If you plan on doing a migration parade of some sort, research the idea first. Environment For The Americas, Nature Canada and Flying Wild all have great resources about how to create events at your schools. Research local animals before deciding which animals to represent in the parade. Ask other teachers in your grade level if they are interested in joining you. Make it simple for them and offer ideas. Try to include local groups, organizations and parents to participate by having educational booths during the day of this event. Start small and hook the rest of the school or district by example.

By learning about which animals migrate and where they migrate to and from, one starts to learn about other ways we impact life on earth and the consequences of those impacts. My students learned about the importance of monarch butterflies and Rufous hummingbirds within diverse habitats.  They also learned about the challenges that are currently impacting them. Finally, this project helped my students become more conscious about their everyday habits and behaviors that impact the environment over time and the changes they could make to minimize those impacts.

The phrase "climate change" is increasingly present in the media, classrooms, and everyday life. ... Read More

Teacher Portal One of our greatest opportunities for teachers is our Summer Teachers Institute (STI). ... Read More