What is sea level rise?

Currently we are seeing an upward trend in average sea level around the globe. Tidal gauges and historical data show a stable sea level for several thousand years, up until the beginning of the 1900s. After this point it is estimated that sea level rose about 1.7mm/year, and now that number itself rises (1). The estimated total sea level rise for the 20th century is 7in (2).

What does sea level rise do?

Sea level rise forces coastlines inward toward land. Slowly the tides creep further and further inward, eventually altering the entire beach habitats and creating new markers for “low tide” and “high tide”. Organisms adapted to certain areas on the beach will have to adapt to this rise in sea level or face a complete loss of habitat. Challenges also arise for humans, as 23 out of 25 of America’s most densely populated cities are located on the coasts (2). These cities, along with communities small and large around the world, will face increased risks from flooding, salt water intrusion, storm surges, and even a complete loss of land.

Why does it matter?

Coastal communities, whether city or village, provide homes and work for millions of people. Many industries rely on the ports on the coast to move goods across the globe. Sea level rise will force these communities and industries inward in search of new stable territory. The cost of this move will rise into the billions of dollars if communities to not try to find solutions now. 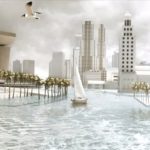