Step right up and behold the Amazing Earth! Orbiting at just the right distance from the sun, Earth has an atmosphere that will keep you breathing and alive for years to come! It contains Oxygen, which you’ve been enjoying your whole life. It contains many other gases, called greenhouse gases that absorb heat from the sun and emit it 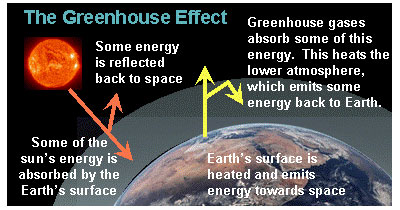 back to Earth, keeping it nice and warm for all life. We call this The Greenhouse Effect. The planet’s surface absorbs heat directly from the sun, and the gases act like a blanket to keep the heat “in”. If it weren’t for the atmosphere, the part of the Earth facing the sun would reach extreme high temps, while the other half would plunge into unbelieving cold. The atmosphere is what makes our planet maintain temps that can support life.

Although there are numerous greenhouse gases (water vapor is most abundant!) two in particular have profound impacts in controlling the temperature of the Earth. These are Carbon dioxide and Methane. The amount of these gases in the atmosphere has changed through Earth’s time naturally which influences how much heat is trapped in the atmosphere. Dinosaurs, for example enjoyed a much warmer climate than humans because there were more greenhouse gases in the atmosphere! Human activity, like burning coal, is increasing greenhouse gas levels. But wouldn’t a warmer planet bet nice? What’s the big deal with climate change? Why does it matter?

In our current situation, the rate at which the climate changes causes us worry. As in, the climate is changing much faster than it has in the past. What has taken tens of thousands of years before, is now happening in hundreds of years. And these warming temperatures are causing big changes on Earth like the melting of glaciers, sea level rise, and extreme weather events!

To add, find links that cover these topics well and post to bottom of this page: